Thanks Elizabeth for this atmospheric cityview of Melbourne. Reminds me of my home city, Seattle. :) 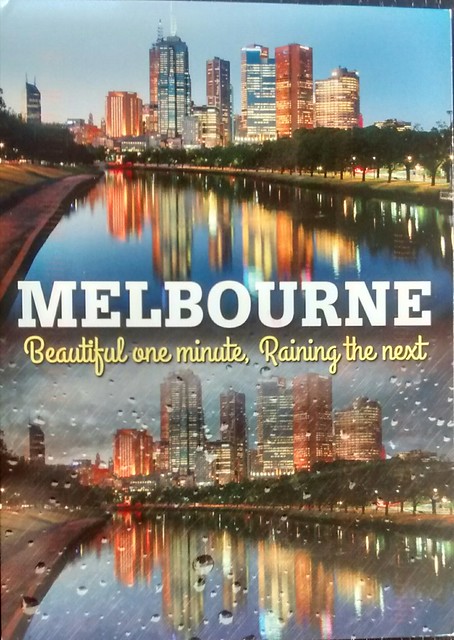 Melbourne is the capital and largest city of the state of Victoria. Elizabeth writes that she was able to visit nearby St. Kilda Beach at sunset and saw the smalled penguins in the world (Eudyptula minor). Their common name is simply "little penguin."

Apparently you can also see this sign. I love it! 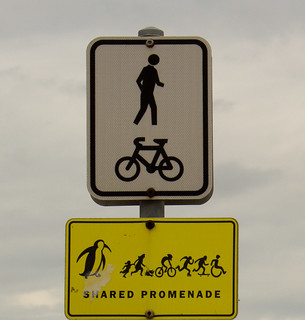 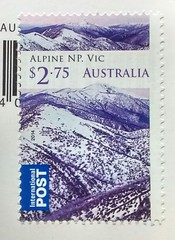 Stamp showing Alpine National Park, Victoria, from a 2014 set of three on the theme "Wilderness Australia."
Posted by Maggie at 1:56 PM No comments:

Email ThisBlogThis!Share to TwitterShare to FacebookShare to Pinterest
Labels: Australia 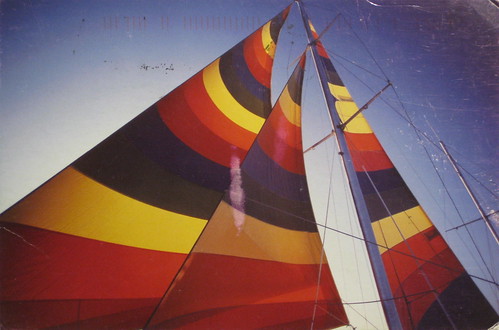 There isn't any info about the photographer or where this was taken.

The stamp, issued in August 2007, shows the post office of Yangon, Myanmar. It was an ASEAN joint issue commemorative.
Posted by Maggie at 1:36 PM No comments: 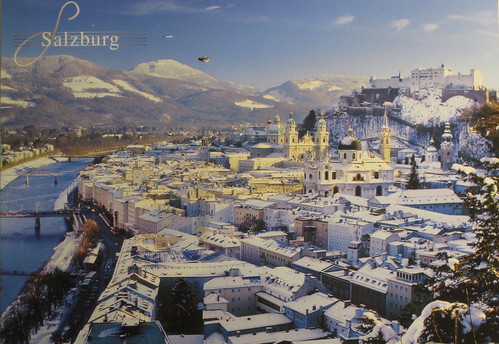 This card was from Rafal for (old) Vacation RR #850. Many thanks Rafal, I love this card. In the picture you can see Salzburg's Old Town including Hohensalzburg Castle on the hilltop to the right; just below the castle St. Peter's Abbey; just left of it the Franciscan Church tower spire; Salzburg Cathedral with the two rounded spires; and Nonnberg Abbey, a Benedictine monastery with the red spire just barely visible in the back. I'm sure there are a few other historic buildings in there but those were the ones I could figure out. The Old Town is a UNESCO world heritage site and is also Mozart's birthplace. You can almost hear the music just looking at this card!

I would love to visit Salzburg someday. So beautiful! 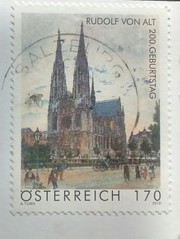 I sent this card to myself when I visited Scotland in the December 2013. Edinburgh at Christmas is one of the most beautiful places I've been. There are a ton of free museums, architecture lit up at night, and you can have tea at Elephant House Cafe, the birthplace of the Harry Potter books! Not to mention the wonderful postcards. Unfortunately, I didn't actually get to see this particular castle in person although I did see Edinburgh Castle and Stirling Castle so I was not exactly castle-deprived. 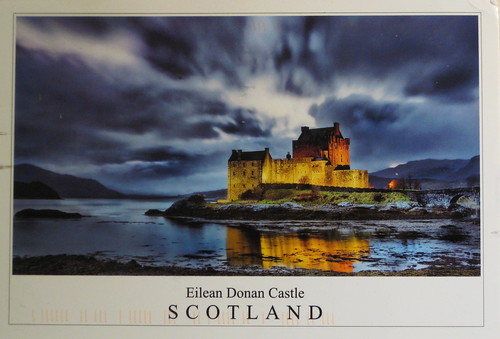 Eilean Donan Castle is located in Dornie, Wester Ross, in the Scottish highlands. Eilean Donan is actually the name of the small island the castle is on, where three lochs meet.

According to Wikipedia, The castle was founded in the thirteenth century, and became a stronghold of the Clan Mackenzie and their allies the Clan Macrae. In the early eighteenth century, the Mackenzies' involvement in the Jacobite rebellions led in 1719 to the castle's destruction by government ships.

The existing castle is a 20th century reconstruction. 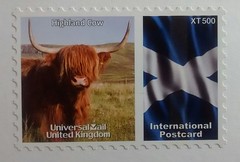 The stamp is a UK Universal Mail International Postcard stamp featuring the Highland Cow and Scottish flag.
Posted by Maggie at 10:46 AM No comments:

This is a card from several years ago, showing Havasu Falls, in the Grand Canyon in the state of Arizona. 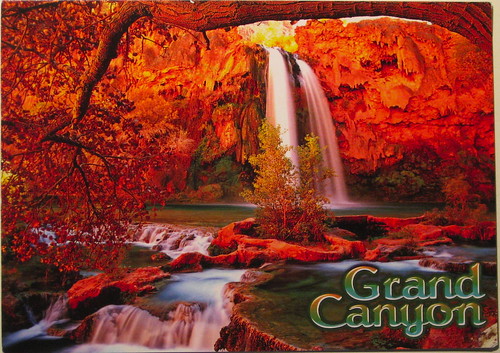 Sent by Solarts66 for the fast favorites tag.

From the back of the card: Havasu Falls plunges 100 feet into a beautiful pool of blue-green waters. This waterfall is spectacular and is one of the most photographed in the world. There is a large beach area for lounging and picnicking in front of the waterfall.

The Grand Canyon is a 446-km canyon carved by the Colorado River in the American Southwest. It is surrounded by Grand Canyon National Park. I hope to visit this area someday!

The stamp is the same polar bear definitive from here.
Posted by Maggie at 1:14 PM No comments:

Long time, no post. Well, I'm back. I have recently gotten back into Postcrossing and hope to update this blog more regularly!

To start with for today, here is a card showing mung bean mooncakes from Taiwan. This card was from RachelDing for the November alternate RR. Rachel writes that mooncakes are usually popular during Middle Autumn Festival, but are eaten all year round. 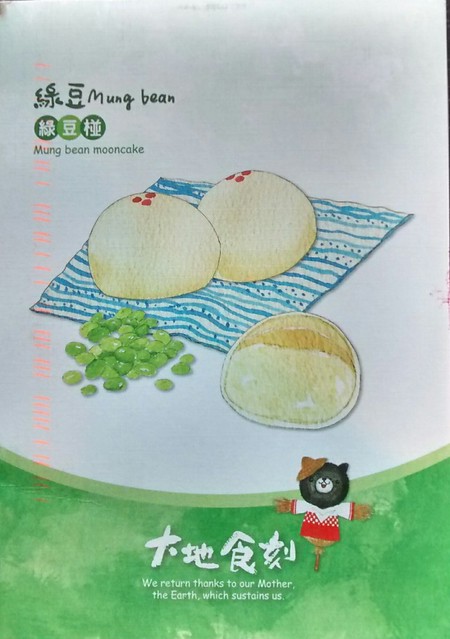 According to Wikipedia, the mid-autumn festival is for lunar appreciation and moon viewing. Moon cakes typically contain salted whole egg yolks inside, to represent the moon. Mung bean is the most common filling in Taiwan (accompanied by the egg yolks). However, "modern" mooncakes can be filled with a wide variety of ingredients such as ice cream, durian, coffee, even tiramisu!

The one on the right is from a 2017 issue of four stamps depicting marine life, with this particular one showing  Culcita novaeguineae, or cushion star, common in Taiwanese reefs. The one on the left is from a non-denominated set of 2 issued in 2017.
Posted by Maggie at 12:58 PM 2 comments:

After all that time in the city, I was really excited to visit Akan National Park in eastern Hokkaido, which is known for being a great place for hiking, canoeing, and hot springs. Bus service is irregular, so we rented a car in Sapporo and drove across the island. It was about a four hour drive, but it was nice to see all the countryside. I even saw my first kitakitsune (Ezo red fox)! 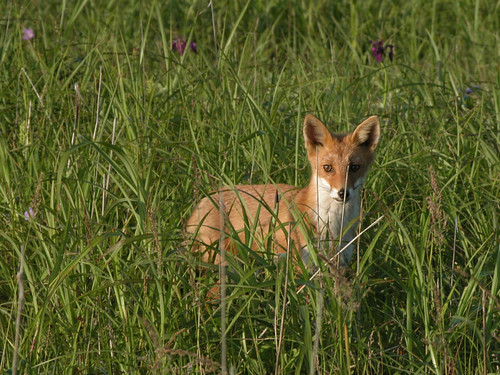 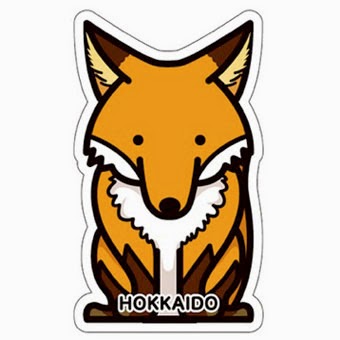 Partway through the drive, we stopped for some Genghis Khan, or mutton cooked on a convex metal skillet, supposedly the way the Mongols cooked on their helmets back in the day. The dish is popular in Hokkaido. 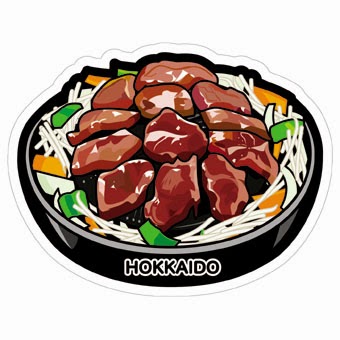 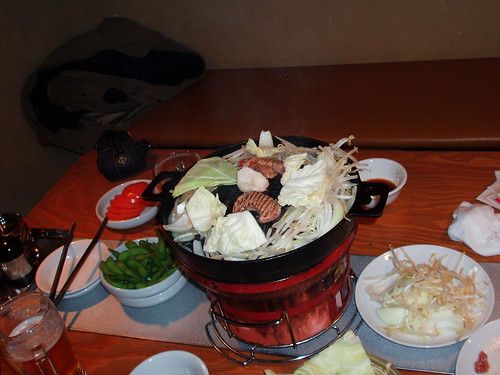 We stayed at Lake Akan, where there is a hot spring resort and "Ainu Kotan," a village ("kotan" means "village" in the Ainu language) with a lot of tourist shops selling Ainu folk art and an Ainu museum. The Ainu are the native people of Hokkaido.

That brings me to the (possibly) controversial part of this post, because one of the things they sell in the village is bear carvings. Traditionally, bear carvings were reserved for religious items such as prayer sticks and headdresses. When ethnic Japanese took over Hokkaido in the late 1800s, they declared that the Ainu were Japanese subjects, and outlawed Ainu language and customs, including hunting and fishing, so the Ainu had no way to make a living. The Ainu people who worked for Japanese logging companies were viewed as dogs - less than human. Some Ainu turned to wood carving as a way to survive. They took what had been religious items and sold them as tourist souvenirs. Umetaro Matsui, an Ainu bear hunter, became a well-known carver of wooden bears.

Posta Collect, in their description of the bear carving, completely erase the Ainu. According to Posta Collect, the image originated in souvenirs brought to Japan from Europe. They mention Umetaro Matsui, but not that he was Ainu. Shame on you, Posta Collect. This is a stunningly obvious example of the racism faced by the Ainu today.

No wonder this bear looks like he is crying.

Photo by Sebastian Tauchmann
Posted by Maggie at 11:15 PM 4 comments:

Add to my collection!

I am always happy to receive surprise cards!

Some of my posts are tagged "mystery." This means there is something I couldn't figure out about that card. You can help! If you recognize the picture, or can read the postal website in your language to find information on the stamp, please leave me a comment. Then I will be able to change the tag to "mystery-solved". :)

Maggie
I'm an obsessive Postcrosser since August 2009. I started this blog to share postcards received as official PC cards, private swaps, tags, and round robins arranged through the PC forum, and cards I've received from penpals and friends.

Someday I'd like to have stamped and written cards for every country/territory in the world. View the missing/received countries list here.